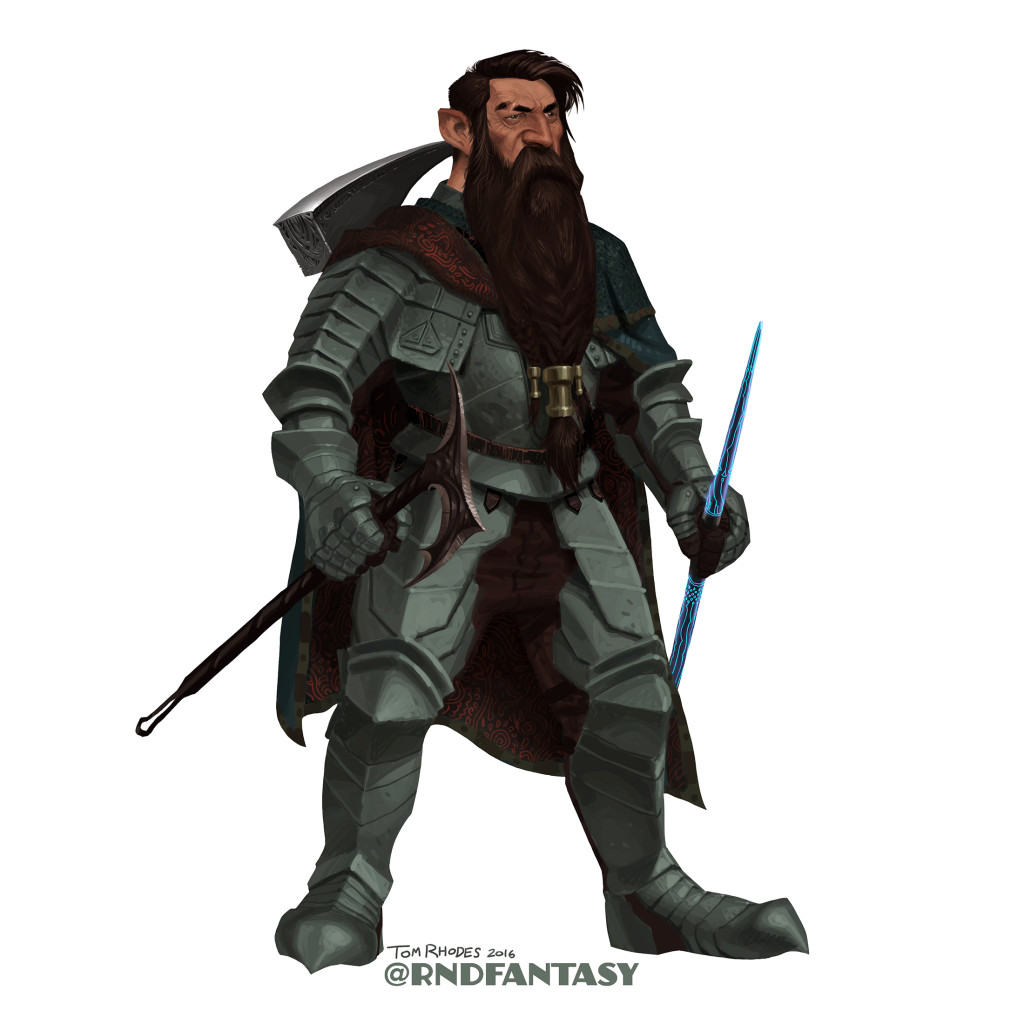 Fargrim was a character I’ve been looking forward to for a long time. Dwarves are my favorite race in Fantasy and I was really glad I took the initiative to implement Dwarf Week. There will be more, and there may be weeks for other races or classes in particular. The majority of people seem to play half-elves and humans, which I shouldn’t find too surprising, though I won’t say it’s not disappointing. Working at Bioware I once found out that only four percent of players played as a dwarf in Dragon Age. I wouldn’t be surprised if even less played as dwarves in D&D for no other reason than there are so many more races to choose from than just three. It’s important to me that there be as much range in these characters as possible. When all of them are done it would be great to see as many races, classes and combinations as possible. Though there is something to be said about making 30 half-elves and keeping them interesting, that’s a major task for a concept artist, probably even harder than designing 30 different creatures. But that’s a topic for another rant. I want to get to Fargrim Rockbeard.

Fargrim wears platemail that was made by his father. He keeps it in good condition and still has the full set. It’s of dwarven craftsmanship (something Fargrim is rightfully rather proud of) so it’s made of some alloy that doesn’t tarnish, and it stands up well to wear. The symbol of Tyr is embossed into the breastplate and pauldron, a hammer and scales.

Included in his description were examples was a cloak of protection from the dungeon master’s guide. I tried to reproduce it as best I could, though in the picture provided it was worn down, around the figure, but in this case I threw it over his shoulder. Not only to better show off the outfit, but also Fargrim rejected his father’s advice to keep himself secret to opponents. That, plus his brawny and over-confident nature, it seemed fitting that he would be as on display as possible, proudly showing off his gear.

His weapons include a large maul on his back, given to him by a dying cleric. It’s based on a piece of art included in his description with some modification to the where the runes on it would go. To compromise his legs of swiftness -1, he carries a lightning javelin, which is largely quite basic steel but has a magical, stylized lightning motif carved into it.

In his right hand is a boarding axe he pilfered during a chaotic battle which ended his sailing career. His ship was seized and his crewmates slaughtered by pirate sorcerers, and this is one of their tools used for boarding ships and fighting. He swore revenge and this axe is the tool by which that curtain will fall. I wanted it to be able to function like a grappling hook, so it has a prominently clawed beard in the front, as well as a loop for where a rope could be threaded through for climbing.
His beard is worn as was described, something fairly presentable for a dwarf. And above his right eye is a scar who he tells people was from a mother griffon who clawed him up after a short misunderstanding when he brought her egg back to her. He feels it will look rather distinguishing when they make statues of him.