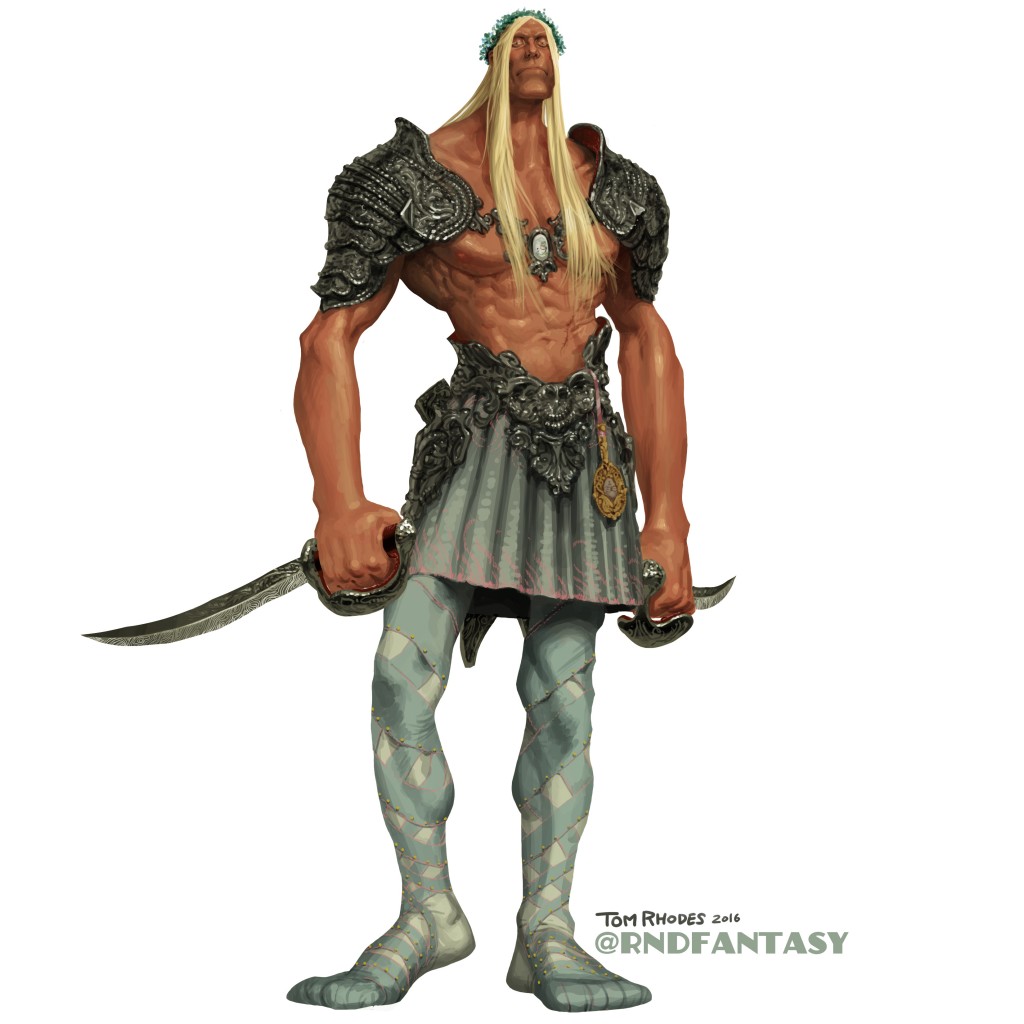 Sir William Amaranth Nigellius, or Amaranth for short, is a goliath who grew up with his mother as the only giants in a human and dwarf city. He was raised inside the temple of Sune and was schooled in the ways of beauty and sensuality. He serves much like a paladin, hating and slaying monsters for being so affronting to his sensibilities.

His armor is allowed to be so skimpy since Amaranth and his allies believe that scars are things of beauty and honor and should be put on display. I felt armor like this would accommodate that opinion. It’s based on 18th century English silverware, I wanted it to be ornate and fancy and expensive looking. More about decoration than protection, with even a dainty little porcelain brooch with a garden scene that I hoped would make it feel even more blatant.

The tutu and leggings are there as a feminine touch, hinting that Amaranth’s visions and ideals of beauty aren’t limited to either gender. I was hoping that the crisscrossing ribbons around his legs would represent the dwarven influence on the fashion of where he’s from, though I’ll freely admit that’s a detail I’d never expect anyone to notice that. It’s simply one of those things that can help you as a concept artist to put your foot down on a design and get things worked out. It’s fitting and it’s based on something about the character. That’s just about all you need!

The handles of his sword wrap around his fingers quite a bit to keep his fingers safe. Scars or not, fingers are sensitive and manicures are easily ruined. Amaranth spends much time grooming himself and being groomed. Which is why I gave him night-on-overly-combed hair.

The handles and grips of his sword are lined with deep red velvet, along with his armor. I figured if he’s going to be wearing them, and with apparently nothing underneath, they should at least be easy on his skin, if not also pleasureable.

On his hip he carries a religious symbol of Sun: a golden mirror, always at the ready.

His proportions were fun to do. One of the reasons why I’ve been wanting to draw a goliath. Not only am I of the opinion that giants (and most other fantasy creatures) look better with long arms, but I think it would be fitting for giant races. I imagine them working well as pendulums while walking, or shifting weight around in combat and maneuvering more easily, but also to get to the ground faster so if they fall they’re won’t hit the floor as hard.