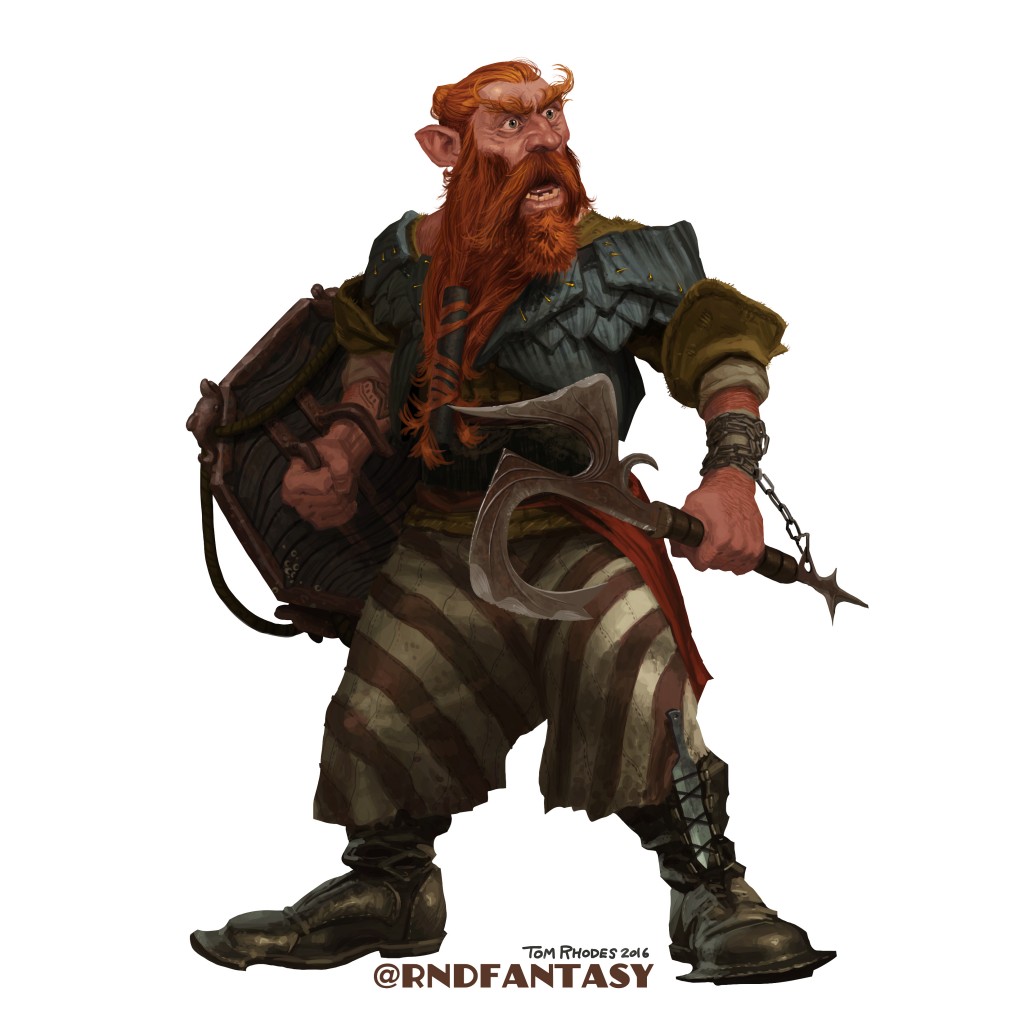 It was a pleasant surprise to get to draw a dwarf again so soon. Very few people play as dwarves, let alone one with naval themes. This time I wanted to make sure he felt nautical.

His hair is as was described, though I went with more of a top-knot than a standard pony tail like what Henry mentioned. I felt it looked less modern. His eyebrows were described as fantastic, though my first idea was to have them more groomed and curly (you can see them in the video) but he looked too much like Dustin Hoffman in Hook. In his beard he wears a beard weight. In Henry’s homebrew campaign in which dwarves are primarily nautfical, he had a brilliant idea of including beard weights as a common feature of dwarven costume. It’s there to keep the beard from flapping up in the face from the breeze or during combat. The rod he’s wearing was described as more-or-less non-descript, so I did exactly that. When separated from Zolo is instantly reaches terminal velocity in a downward direction and punches through everything until it hits the ground. The knot holding it in place is called an icicle hitch. It’s a constrictor knot that can, apparently, allow you to hang objects from upside down cones. I’ve only tried it on cylinders and it worked there but have yet to actually try it on an icicle. I figured it would be fitting so that no one could yank it away and it wouldn’t fly out if Zolo spun his head really fast.

His armor is made from the belly scales of a blue dragon. Here I fudged the lore a bit and made the scales blue rather than what a blue dragon’s belly scales are actually colored: yellowish. I did it for communication’s sake. The scales are attached by golden nails like how a farrier would attach horseshoes to a horse. Nail up through, then bent down into a little gouge.

His war axe is based on a sketch sent in by Henry, though I wanted to spice it up a bit. It was inspired by African throwing-axes which are some of the most bizarre looking bladed weapons ever made. This weapon is called Whirlpool, so to compensate for not being as symmetrical as Henry’s sketch I made sure the strengthening stripes spiraled inwards, and also made sure the cutting part of the blade had a wave motif. He has it lashed to his arm by a chain so he doesn’t lose it, so keeping that in mind I made the handle wood for its lightness.

The shield is designed based on a lifesaver, though I ornated-it-up a bit as well as dwarfed-it-up a bit. It’s octagonal rather than circular, and the rope is attached by loosely-medieval-style dolphin figures. The wooden slats are wavey, which would make it harder to make and more artisanal and more expensive. The shield and war-axe were commissioned by Zolo and he is the head-honcho of his troupe. Everything he has is intentionally aged and rusty. It’s damp and wet at sea and I think rust would be a great tool in depicting nautical dwarves.

His pants are sturdy, baggy pirate-style pants and his boots are fairly standard aside from the flipper modification over his toes. At one point in his backstory he was hurled overboard and had to swim for three days. I figured he’d want something like this to help with swimming faster, and with his shield (which can magically float under any weight) he’d actually be in a pretty good place if he went overboard. The knife in his lases is there in case he has to cut his boots off, but it’s been there so long the handle has rotted off leaving the tang visible.