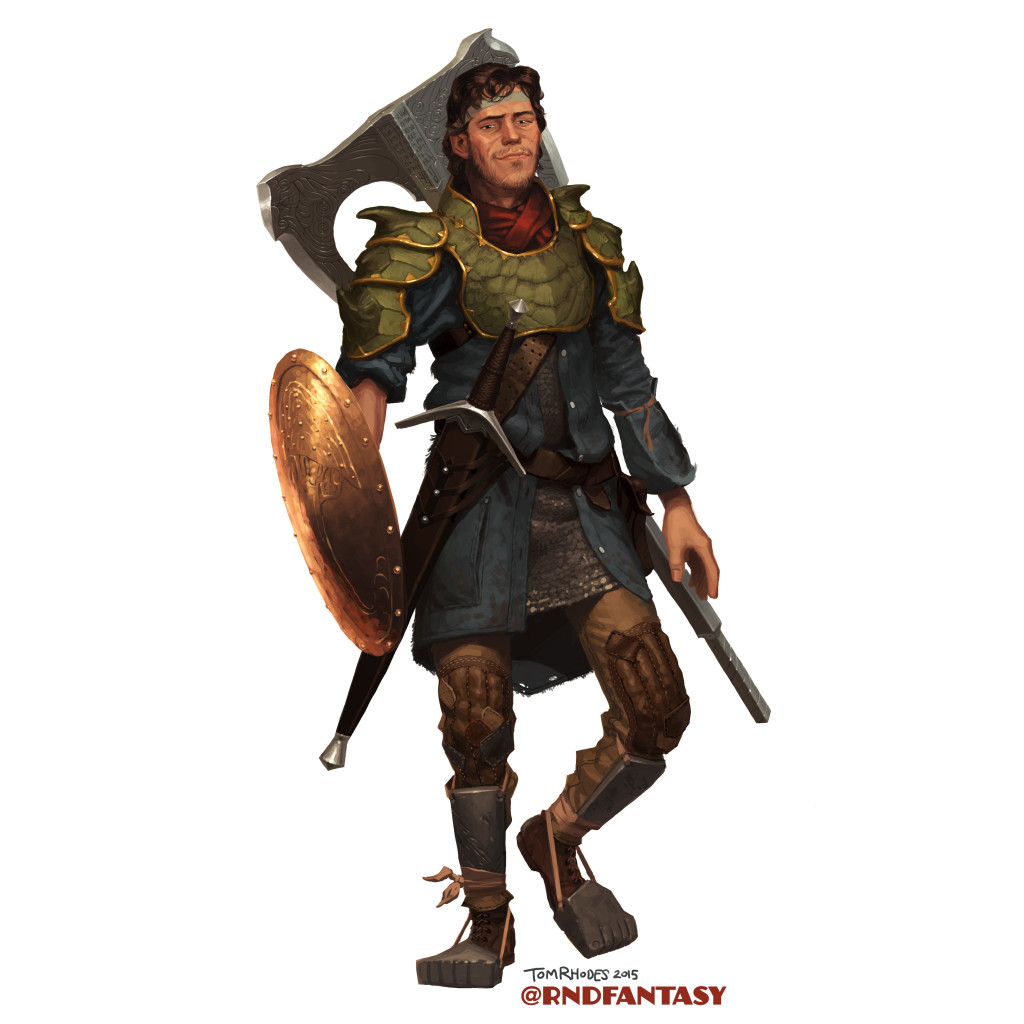 This is Terril Fellscar. The youngest son of a tavern-owning family from a small mining town. After spending a few months as a merchant guard he was swept away into the adventuring life. He’s pieced together his set of kit over the course of his experiences, ranging from dwarven artifacts to randomly plundered loot and a few things to remind him of home.

He’s a strong and capable young buck but he’s also got a big heart. He’s loyal to his friends and protective, even of strangers. While he’s largely humble he’s not entirely free of bragging. Perhaps learning the habit from potty-mouthed Dwarven merchants he’d overheard while clearing tables in his parent’s tavern.

Still adjusting to his new lifestyle, Terril’s outfit is the result of an eager young man galavanting around without too much concern for his aesthetics, as long as the stats are right. He carries a massive dwarven great axe which shares a sturdy belt with a highly-crafted longsword (also of dwarf-make) which was given to him as a reward by it’s creator (a kingly gift!). His shield was pulled out of the swamp beneath a black dragon though he’s had time to polish it by firelight after long days of travelling.

He wears armor made of green dragon scales, more likely plunder than reward in this case. His armor, pants and boots were inspired by early football equipment, going along with his stats from his character sheet. He has high strength and constitution, he’s charming but not too bright. More wise than intelligence (street smart vs book smart). He’s essentially a likeable jock and I thought that’d be an interesting thing to try to bring out.

Being from a mining town influenced by dwarves, I’d imagine he’d leave home with what he’d fancy were the best boots to go adventuring in which would be dwarven-made steel toes (along with steel shank shin guards).

Terril is the youngest son in his family and as such is no doubt the recipient of many hand-me-down clothes, hence his large, ill-fitting shirt and his much-mended pants. A scarf from his mom to keep him warm also helps to keep the viewer’s eye around his face. With a character with so many colors going on it’s good to do what you can to encourage the eye to linger in one or two spots maximum.

Terril was a big challenge, but for an unintuitive reason: it’s because he’s so normal. Far-out characters are much easier to breath life into or make eye-catching, but when you have a strong, charming human fighter with brown hair there isn’t much to go on, but thanks to the in-depth description and history from Taylor, after I did more mining of my own I was able to find plenty of nuanced details and character traits to put some designs down. For more information into the details and process of this design watch the long-play video with commentary. Thank you!