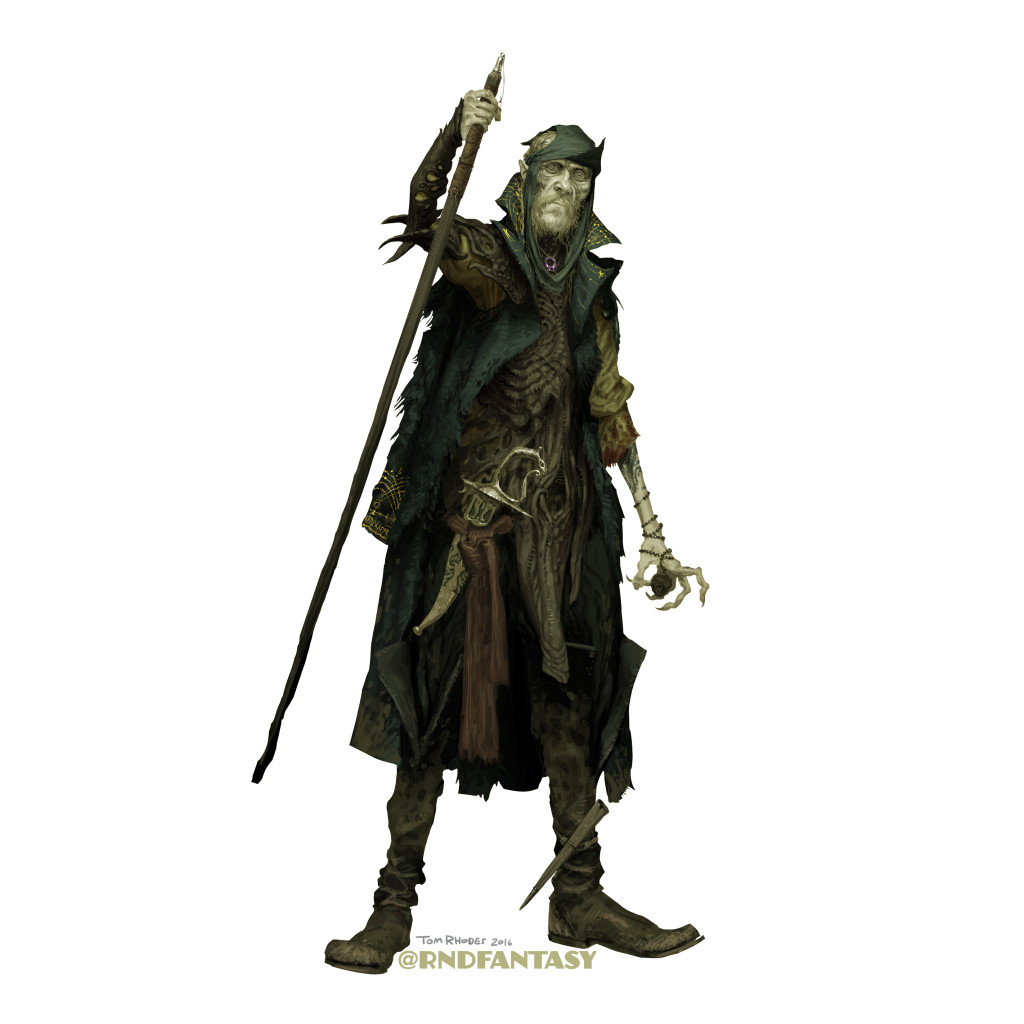 Raleigh was an interested and deep character that was another great challenge (every character has been, and should be, a challenge). I didn’t think I’d be combining D&D with the Cthulhu mythos at all but they work pretty well together. There’s at least a lot of context for “eldritch” forms and textures.

He’s a half-elf, gaunt, ex-navigator, Cthulhu-worshiping-Rasputin-type warlock and he’s not even evil, though in the company of Cthulhu his trajectory is certainly obvious in that regard. His eldritch-inspired warlock class and his navigator/sea-faring past took the stage on his design. His bandanna has a flipped up corner for visual interest but also as something that could function as an eye-patch for going below deck, but without going full pirate-mode with an eye-patch. His coat was inspired by recognizably naval peacoats and naval officer coats from over the last few centuries, most notably with the large lapels, dark blue color and gold embroidery around the cuffs. Though in this case since he was a navigator the gold motif is based on medieval astrolabes and star charts. The pins on his lapels are also symbolic of navigation: a star and a compass (the geometry set kind not the hiking kind).

Under his tattered jacket is light leather armor. This is where I wanted to bring in the Lovecraftian surface quality. It was described as having swirls and patterns sewn into it, but I pushed it a bit further. I wanted it to look as if it had been soaked leather draped over something evil and Cthulhuey and had embossed itself over it, this evil organism from within bulging into the surface. It could have been originally stitched together but over the years the form has taken shape, slowly.

The ring on his neck is carved from a crystal of Aberratium, which is essentially coalesced Chaos. Long story short he was forced to marry an immortal (who looks 14) as a proxy for Cthulhu. This was his wedding band but he wears it to remember his father-figure status of the girl. I put it on his neck because I wanted to distance it as a symbol of traditional marriage, he doesn’t have a sexual or romantic relationship with the girl so it’s more of a memento, and even though a ring on the left ring finger is an iconic way to show someone’s married, it wouldn’t necessarily be what people in Raleigh’s world would do. I didn’t feel like making up a new rule so I put it around his neck for someone else to come up with if he ever puts it on the appropriate finger.

His tattered, puffy pirate shirt has aged into a tobacco-sweat stained mustard color, ragged-edged and filthy. On his left hand is a pendant of secrets. I wasn’t given a description of what it does or what it looks like, other than its beads are wrapped around his hand like a rosary. So to go with the secrets idea, but also the pirate/sailor theme, plus the fact that part of Raleigh’s history involved hanging out in curio shops at the dock, I went with a shrunken goblin head. It’s smaller than a shrunken human head, and since its mouth is already stitched up I then pinned its ears over its eyes, so I’m pretty sure no secrets can get in or out of that thing.

A faded red sash (a pirate’s gotta have a sash) holds a creepy silver dagger. A curved blade makes it seem more exotic, something available either to a sailor or at a dock, and ceremonial as well, something that could be used in a ritual. I chose silver because it has a nice occult/mystic reputation in a lot of places. He has 2 sheaths but only one with a dagger in it. The other, an eel skin sheath on his boot, was given to a girl he took care of. I put it there because I’d recently drawn a character with 2 swords side-by-side, but I also thought it’d be good because sailors often wear knives on their ankle.

Kevin’s description included standard sailor boots, which I was happy to oblige. But rather than show them how they’re normally seen (folded down) I kept them folded up. Also nice and tattered and ruined, he’s been wandering for a long time, and no one will give him passage.

His staff has a tiny bell on the tip. He found near where he came to after washing up on a beach. He had been in a shipwreck the night before, where deep in the water he encountered his new master for the first time. The bell had no clapper, and for Raleigh it’s a symbol of what he is now. A bell with no clapper of its own, but Cthulhu will fill that role. For the handle, to add more to the nautical feel I included some Turk’s head decorative knot work, a small hook in case he wants to fish, and some notches going down the side. Something he may be counting, or counting down to.

My favorite aspect to designing Raleigh was what he got me to never consider doing before: coastal/sea-faring fantasy. I’d love to reenter this territory in the future, as I’m normally just an inland fantasy guy, things like mountains, forests, castles, that kind of stuff. Raleigh is a great reminder of just how vast these worlds can get, with many different occupations, cultures, lands and seas and all that that implies.