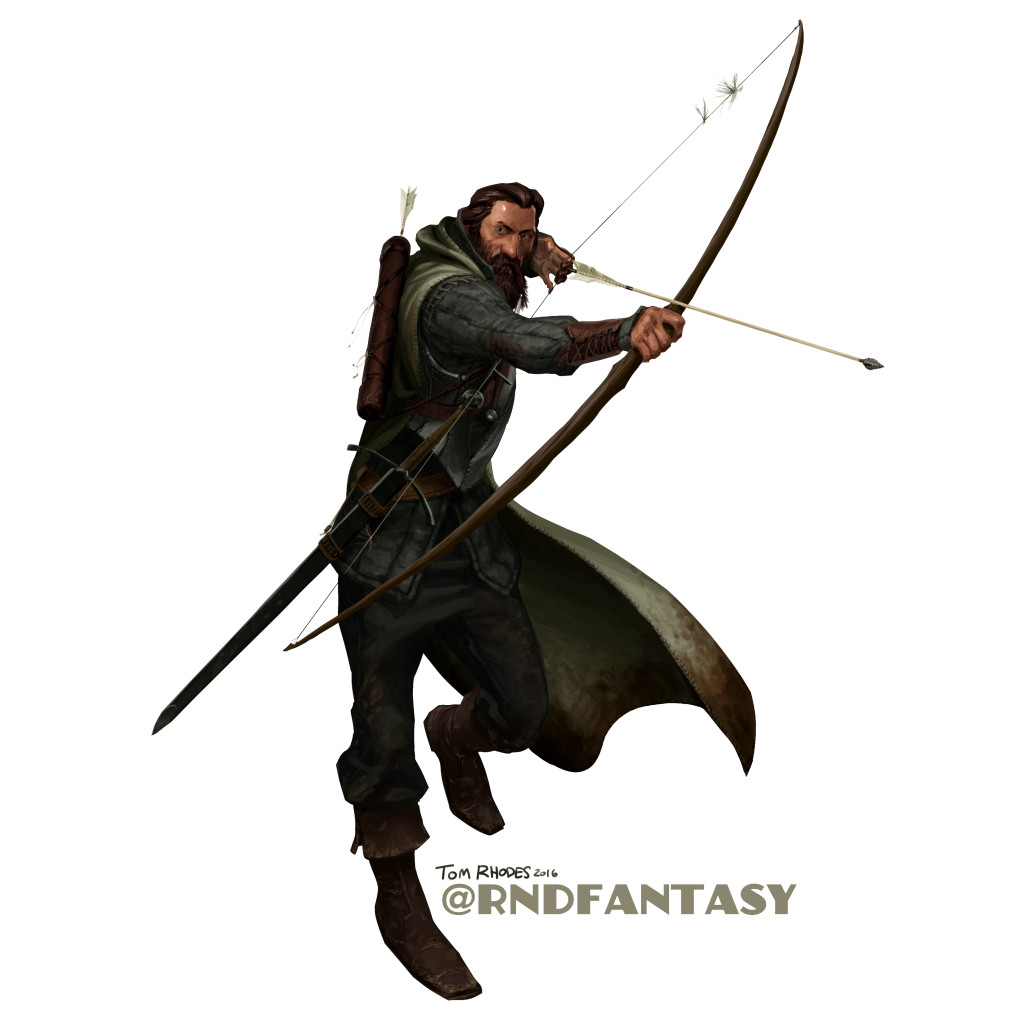 Malum Veritas was both a challenge and a not-challenge, which is a challenge in and of itself! Jared gave me exactly what I ask of all the winners: as much information about their character as possible. He had particular and specific items of clothing, weapons and how he wore things. Which took a lot off my back as far as artistic duty, but I kinda missed being able to have more say. BUT! That sounds like a bad thing, but it’s a good thing, because it’s a challenge, and challenges are rewarding. This is a major aspect of concept art: how do you satisfy the client’s vision while accenting it with your own spices without contradicting the vision. In this case I added a few things which I’ll go over the things which I augmented or changed (slightly) from Jared’s original vision.

No hair or beard was specified beyond color, so I went with long and greasy. For the beard I wanted a pronounced moustache to give him a Western look, something 19th century fur-trapper style to give it more of a mountainy, survivalist bent. Malum is an ex-military ranger living in the wilderness after fleeing his corrupt forces.

I gave him bloody knuckles as a little hint at a rougher-than-your-average-adventurer lifestyle. I figure they’d be a sign of someone who uses their hands a lot, in either hunting and setting traps or combat, which would imply not using, or even losing a weapon and needing to improvise. As for a tiny, itty-bitty call back to him rebuking his military history is the only fingernail of his we can see is dirty. In the real world militaries hygiene and grooming play a large part of daily life, so it’d be a sign of him either not caring out-r-ght, or being too busy to not care. Subtle, maybe too subtle, but Jared’s vision was very clear!

I modified the bow slightly from the photo I was given. I made it more rough-hewn and basic than the reference. I wanted it to look like something Malum would easily make quite quickly in the woods. Something we could leave behind and not worry about. One thing I added was the silencers at the top and bottom of the bow string. These are things archers use to muffle the twanging sound the bow makes when you let an arrow loose. I think a ranger who skulks around in the woods would find use for some more stealthy stuff.

Jared initially asked for the hood up, but unless a character has a really iconic or important face-covering I try to make sure their face is visible, so I threw it back, but not too far back. Back enough that it could have just fallen back a bit, mid-action just a moment ago. Hopefully something that could be considered a compromise. I also made it to look like a U.S. military surplus wool blanket. Excellent product, but I even added the blanket stitch around the perimeter to help its look. Something I’ve also mentioned in other videos is that with fantasy art if you leave a piece of fabric with a naked edge instead of including some kind of trim or hem or stitch or pattern, it just tends to look too sterile and out of place.

After I sent it to Jared he asked me why he only had one arrow in the quiver. The way he envisioned Malum would have had him better prepared than that. The reason for fewer arrows was the same as the reason why he’s looking off to the side instead of down his arrow, on bended knee as if about to take a sniper-style shot which is what Jared initially had in mind. It’s because he’s surrounded. He’s low on arrows because he’s already put a few of them inside some monsters, and he’s scanning around to weigh his options for his next arrows. Fewer arrows = more dead monsters = longer survival = more bad ass. Plus the dynamism of the pose is more interesting, plus it also more consistent with the rest of the characters. I’ll be doing more and more dynamic poses more often, but only if it suits the character, but I want them to all look pretty good all together by the end of all this.
Malum Veritas was a solid character and I was pleased to illustrate him for Jared. I learned a lot from the process, and Jared even hooked me up with a lot of excellent reference material and YouTube channels pertaining to medieval arms and armor. I’m very grateful.