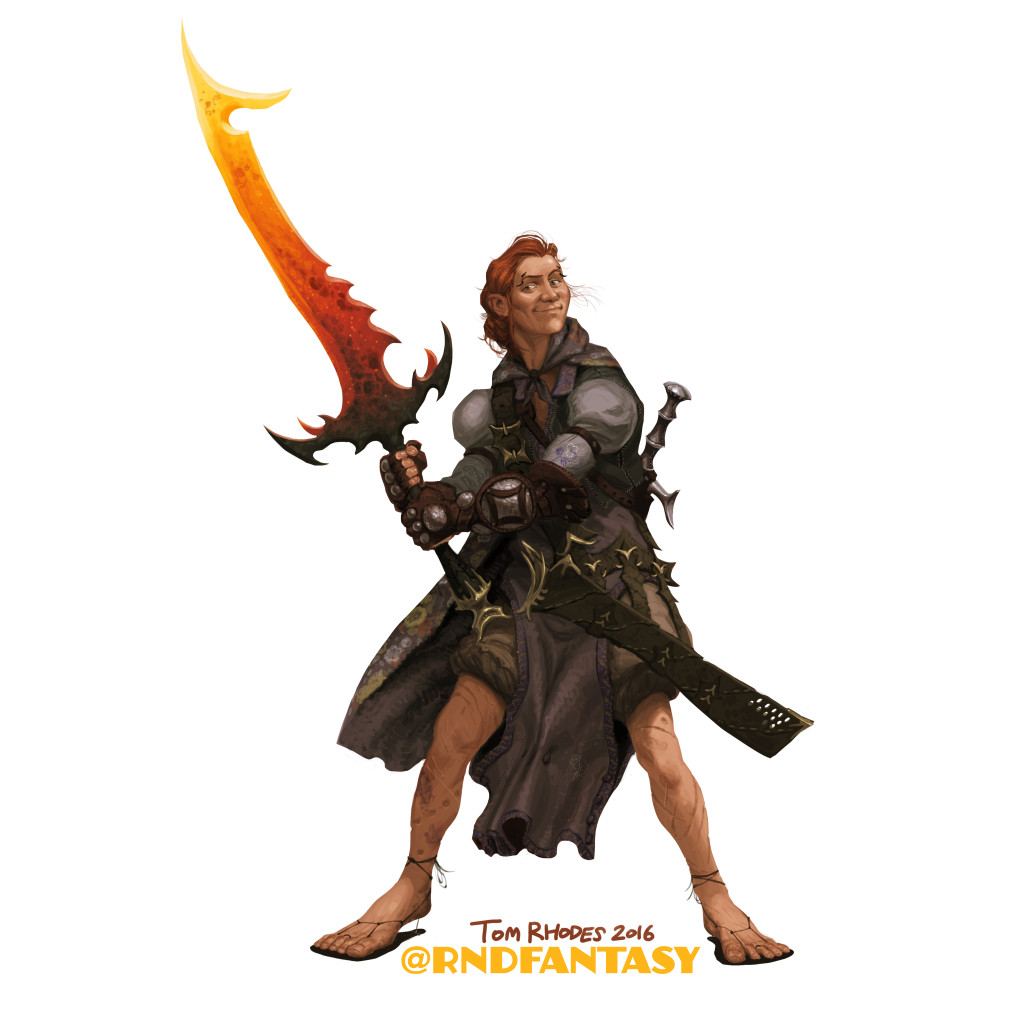 Lyra was an interesting character to work on. She presents a challenge that might seem unintuitive in that she’s dressed in very normal, down-to-earth clothes, but that somehow makes the job of a concept artist more difficult. Flamboyant over-the-top characters that wear dynamic, nutso costumes tend to actually be a lot more straightforward, and also come with a lot more room to play, but when you’re working with more mundane or natural clothing there’s a lot more left to subtlety and nuance. Thankfully in the case of Lyra everything about her that’s not flashy is informed by her character, which was created by Elliott in memory of his close friend Sarah who passed away in November.

The first thing you might have noticed was the sword. It’s a flaming sword that belonged to the evil brother of the Dragonborn member of her party. It’s based on a sketch sent to me by Elliott as well as his description of it being a flame sword, and it had a hooked tip and serrations due to it’s vicious quality that gives it extra damage. It’s over-heated metal instead of a standard flaming sword because I think the look is more interesting, but it still allows for it to be on fire once it passes through anything that would stick to and burn off of it (like orc guts or troll hair, etc), so it still gets to be coated in flame during battle. The shape of the blade somewhat disqualifies it from a typical sheath so it’s laid into a v-shaped trough like a hot dog in a hot dog bun. Many bladed weapons with curved or end-weighted blades have sheaths with open segments, like a kukri. I also figured that since the sword has enough magic to make the metal hot, it would also have enough magic in it to keep the handle cool enough to touch.

Her cloak is a Cloak of Protection +1 that she had to sell her worldly possessions, house and wedding ring to get, so it must be pretty impressive. In that case I figured that any cloak that expensive probably wouldn’t look that expensive (if it’s in the marketplace of a barbarian) so as to not draw attention. What’s the point of a cloak of protection if it’s going to make you more likely to be attacked. So I figured it’s worth would be in some form of magical attribute. Just to hint at this I covered the cloak in lichen like a stone, as though the cloak has so many things in common with stone magically, that nature itself would be tricked into treating it like stone. Only difference being that it’s flexible.

Her clothing was given to her by an elderly gnome couple who she worked for in their tailor shoppe. She wasn’t much for embroidery or stitching (hence her practice “doodles” on her dress) so she did clerical work for them until they suggested she become an adventurer. I imagined since they’re likely old-fashioned and kindly the older gnome woman would have given her something “she would look so nice in” so it’s a modest, girly dress with poofy shoulders and mountain-flower designs sewn into the trim. Lyra since modified the dress to allow her legs better clearance while fighting, while also being able to button it back down to keep it from getting yanked in battle. She’s a rough-around-the-edges tomboy type so she wouldn’t be concerned with exposing cleavage or anything so she’s just wearing it all very practically. Though she hasn’t traded it in for something more functional for a berserker, likely out of sentimentality.

Elliott informed me that since she was trained as a ballerina and hated it she wears sandals so her feet can be free. So when I gave her sandals I tried to make them as light and out-of-the-way as possible while still having enough points of contact to not fly off while fighting. Her feet are also a bit cumbersome from her ballerina days. Look up ballerina feet to see what I mean.

Her legs were exposed not only because it suited the free-foot and the dress ideas, but also because a big part of her character was her scarred skin. She has enough magical know-how to mend her clothes with prestidigitation spells but not her skin. And since she’s a barbarian she doesn’t wear armor so it’s gotta show somewhere.

She has a pair of Bracers of Protection so rather than just do simple gauntlet type things I wanted to structure of them to offer more protection physically, so they cover her hands like MMA gloves and extend up over the elbow a bit. The metal parts are essentially bucklers of varying sizes so help push the protection aspect.

I loved working on Lyra, I find tomboy characters refreshing, and it’s always a pleasure to try painting magical objects and effects.