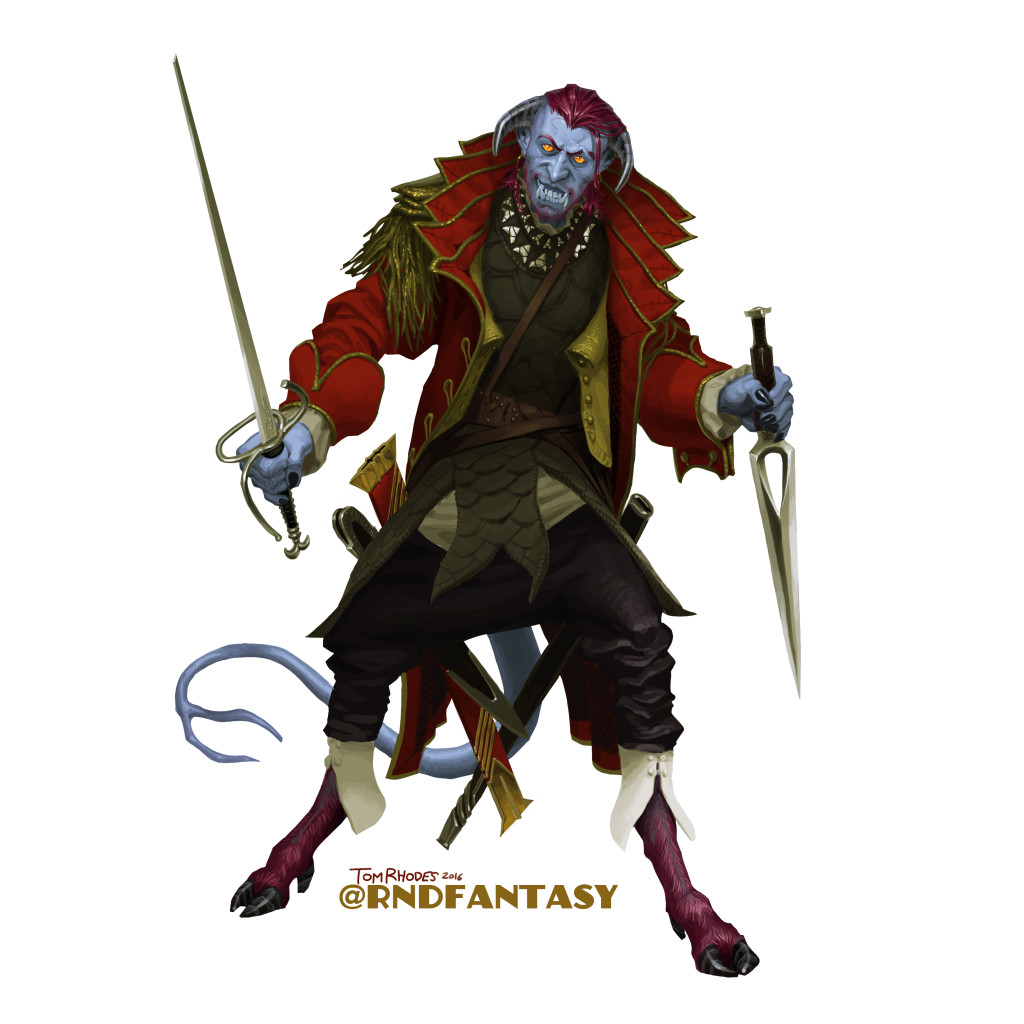 Korolos was a fun character, though it seems that all of these characters have been fun. What I should say is rewarding. I’m excited that people are still playing as the more creaturely races, which are my favorite. I based his pelvis somewhat on a kangaroo’s pelvis, I saw it as a fairly reasonable structure to base it on. His anatomy just needed some anchor points for the muscles in his tail, and latching into a place that wasn’t already claimed by a the standard set of a humanoid. His legs from the knee down are essentially one-to-one goat legs, and in order to accomodate the horns I just beefed up his trapezius muscles slightly. I don’t think a Tiefling would be using their horns in mating combat situations and would largely be for show (though I’m sure they’d deflect the occasional attack)

He lives a sea-faring lifestyle and has been asea for most of his life. His first captain gave him his coat, which is a fantasy-ized version of a standard iconic captain jacket. Basically anything with gold trim, shoulder boards and a stiff collar will work for that. But I was sure to include the suitable tail split in the back. While his tail isn’t prehensile (useable for grabbing/manipulating things) it would need to sway and flick and move around quite freely for balance.

His basic leather armor is in the form of a stylized fish, with the tail near his groin, a scale motif up the torso, and then an array of shark teeth around the neck. This serves as an eye-catching mantle, increases the arrogance and ferocity of his look, but also emphasizes his nautical sense of style and are also just there because that’s the mouth of the fish, as if he’s being swallowed whole. It’s not a cool depiction of a fish, it’s not very realistic either, but I’m not designing it, some dockside leatherworker made it. At least that’s what I need to try to trick you into thinking as a concept artist. I don’t know if that’s a skill one can master, but I think it’s an ideal one should always strive for: to get out of the way and let the world you’re working on show itself through you. I think a concept artist (particularly of fantasy) should be more of an archaeologist than a designer. But that’s a rant for another day.

He has three sheaths and two swords. The third and empty sheath he found and took as loot, but he’s hoping to find whatever weapon glass-slippers its way in there. Whatever it is it must be pretty good with a sheath that nice.

I’m skeptical of a hooved being’s need for shoes, so I left them clear. If anything I could see them wanting “shin” guards (they’re really be top-of-the-foot guards), but not only do I see them pretty useless on a ship (footwear over hooves in general) but it’d also be a wasted opportunity to not draw some goat feet in this world rife with humanoids.