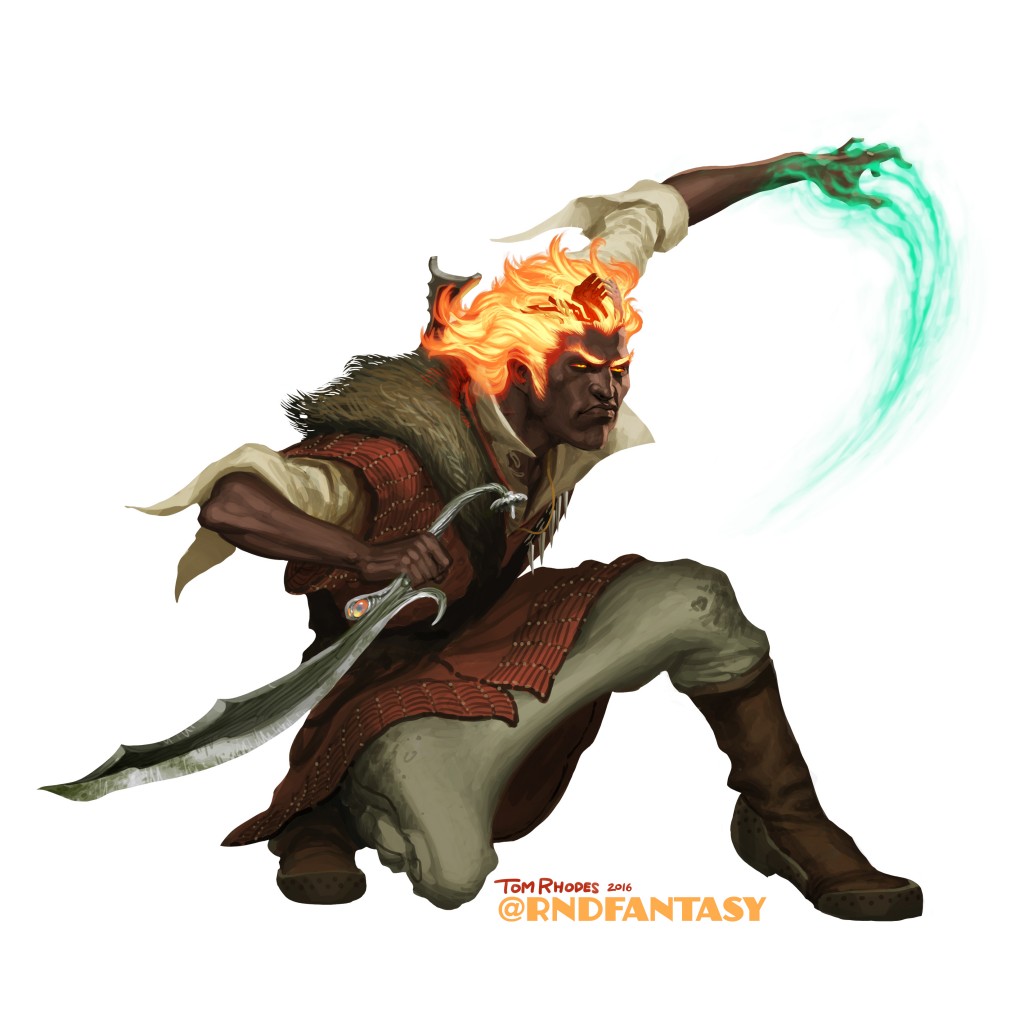 Klix Akiro is a Fire Genasi, which is essentially a human with fire for hair. I largely went for a one-to-one rendition of the aspects described by Jacob. He’s a dynamic fighter/wizard/eldritch knight who focuses on close-quarter-combat with magical enhancement.

He wears clothing inspired by swashbucklers, with a red tunic over a billowy white shirt and a brown leather belt across his chest. The bit of fur over his shoulder was there to help add some asymmetry to the design but mostly as something that could help insulate a good portion of his tunic from the fire.

He wears a circlet of dwarven make, meant to harden the mind and focus his magical abilities. It’s stylized to be angular and typically dwarf looking, but it’s two large interlocking hands as a protective layer. It’s hard to find a balance between circlet and helmet but I wanted to push it that way anyway.

His sword is a scimitar made from alchemized silver. It has sonic abilities which can create a thunder clap and even deafen those it strikes. For that reason I gave it a bit of an extra kink to what would otherwise have been a standard scimitar blade, which I felt is somewhat lightning bolt shaped. The texture of the blade is my interpretation of alchemized silver. I pictured it being made of hammered-together slivers of desperately crafter silver, then sharpened on the edges.

He doesn’t wear armor, preferring the mobility fabric, but I felt it would be good to reinforce the fabric to some degree at least against slashing attacks. So the grid work is of metallic thread with brass beads. Not sure how much it would help but it’s better than nothing.

His shoes were inspired by an antique pair of aluminum soled boots I found at some point. It seems like something industrial and black-smithy and was an attempt to tie the boots to his fiery nature even if only vaguely at best. I think giving characters unique footwear is important, it’s often overlooked. The boots I found had one solid sole but for Klix’s boots I felt it would be wise to split it in the middle for more flexibility for his dynamic fighting style. Less like a ski boot.