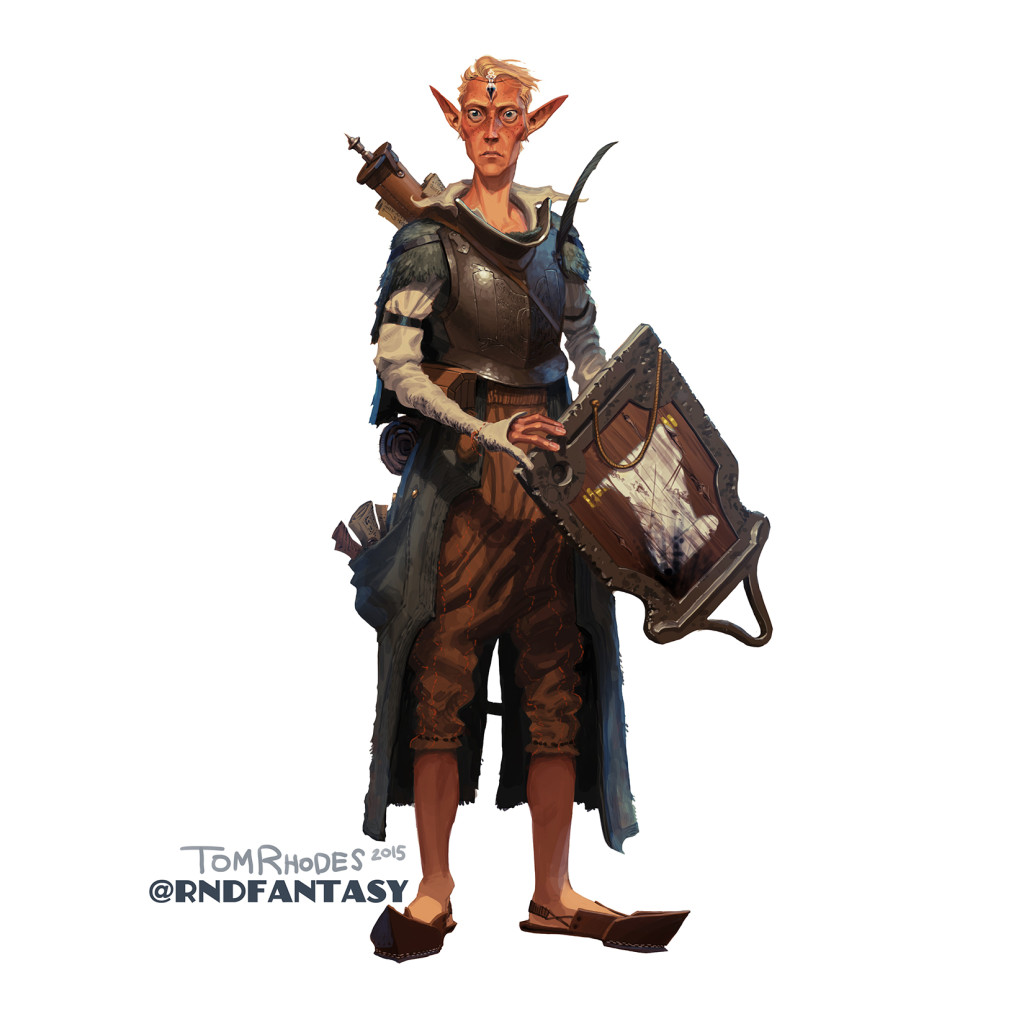 This is Kirdan, he was drawn for @WanderingHunter, the very first winner of my weekly DnD character art lottery.

Like every concept I found this challenging but enjoyable to work up. As always I start with as much information about the character as I can be given. Particularly useful are insights into his personality and history and WanderingHunter was able to give me plenty of great info about Kirdan.

He’s a young, high-elf scribe just leaving the monastery of the Clerics of Oghma, the Lord of Knowledge where he was raised from a very young age by the brothers living there. He was trained as a scribe and scholar and after having exposed himself to locked-up tomes about combative wizards and less-than-savory spells found himself bit by the adventure bug.

Not wanting to leave the order outright he petitions them to have his tasks go abroad, travelling (and getting into adventures) and gathering knew scrolls, books and knowledge in general, while also sharing the good news of Oghma.

He likes the practical usefulness of wearing a breastplate and carrying a shield (modified into a portable scriptorium) even though his combat skills primarily revolve around abjuration spells.

He’s shy but eager, friendly and a bit of a daydreamer. While preferring time spent indoors with a good book, he’s now too determined to simply deny the call to adventure, even if he’s a bit concerned about what kind of man he’ll become.

Being a religious figure I tried to imbue his outfit with features parallel to many things we might recognize on Earth. The vial of his ink is placed prominently on his forehead. Unashamed of his missionary task, but also to reflect on the significance of the act of writing to his order. Inspired by the phylactery of Judaism.

His facial features and white shirt (full-length sleeves based on 19th century printers and the high, tight collar now worn open for comfort while adventuring) were inspired by the young, male Mormon missionaries I see every so often. Typically performing their duties around the same human-equivalent age of Kirdan.

Baggy pants and sandals inspired by Buddhist attire. Down to Earth and practical, though the pointy toes are there as an aspect of his elven heritage, without being TOO pointy. His “gloves” were also inspired by an Eastern religion: Shinto. Their monks sometimes have this long sleeve with a covering over the back of the palm. The covered finger being inspired by one of my students Cintiq gloves. I thought it’d be good for keeping his hand clean from ink.

The open portion of his duster jacket were based on Gothic architecture, particularly of door and window frames.

All in all I found Kirdan a refreshing break from the typical teeth-bearing sword swingers I typically enjoy drawing. He was a great challenge and am happy to have drawn him!