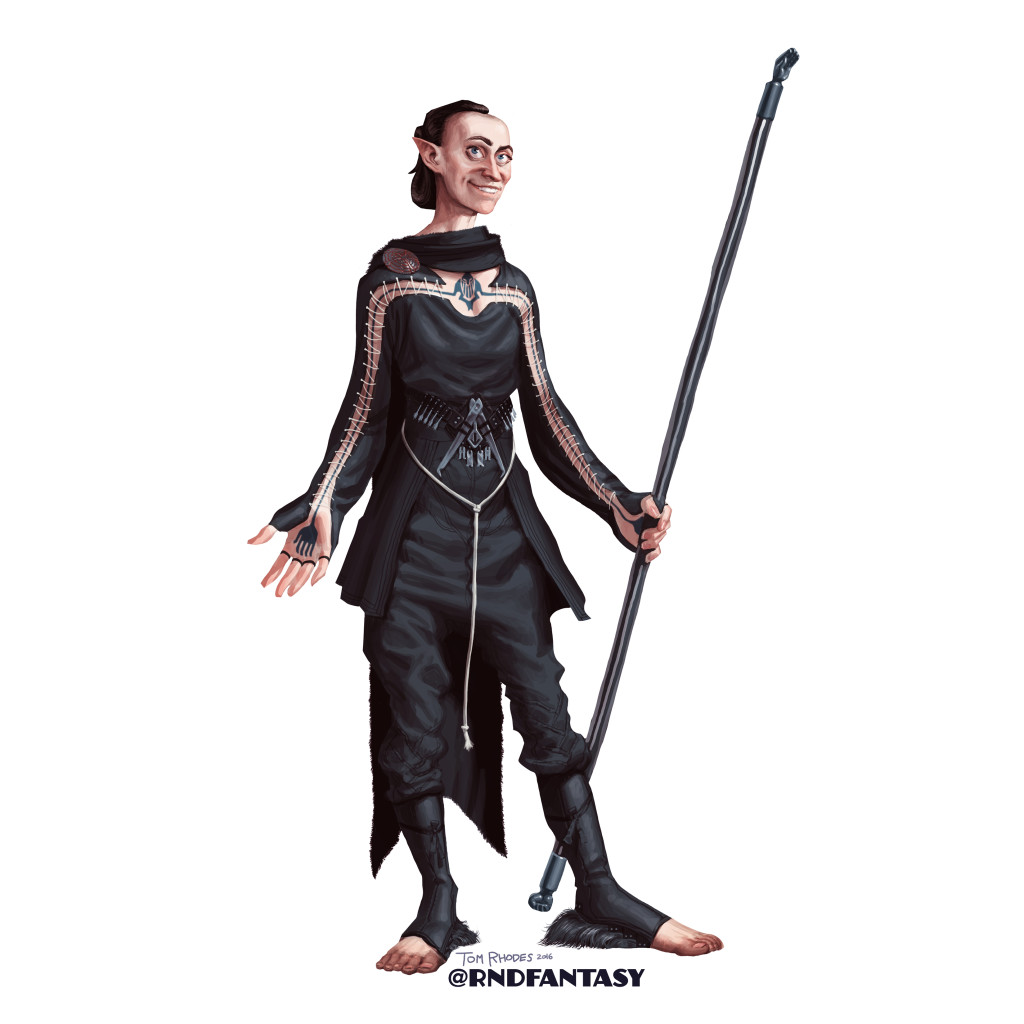 I was happy to get to draw Illyria for Anna because she’s been participating regularly  in the lottery from very early on, so it was happy to see a familiar face win. Illyria is a lawful good, half-elf, monk of Tyr who follows the way of shadows. Her description called for dark, loose-fitting clothing for sneaking around in the shadows and no armor. She has a staff that’s longer than she is tall and a badge she got for joining in the city guard of Dross.

Her hair was described as dark brown and very long, though she often wears it up. Since she was described as being an excellent combatant I figured it appropriate to show her with her hair up. It also says more about her state as a loyal monk. The front half of her head is shaved, something to also help with the loyal monk aspect of her character. Taken from the idea of the monk pate of medieval Europe, a haircut intentionally chosen because of how silly it looked, something for humility.

She is half-elf, which itself allows for a wide range of feature possibilities. Unlike Raleigh I went more towards the elf side with Illyria. In her description part of her story involved being 6 years old and seeing an elf for the first time, someone that looked so much like her. It was a high elf, so I figured I’d go for larger ears and also sloped up eyes, a trait common in depictions of Wizard’s of the Coast’s high elves.

Her outfit is a blend of Zorro shirt, ninja and karate gear and a few Eastern and Western monk features. Designed to be unisex, the black Zorro shirt has an opening from the chest to the palms, revealing a tattoo of Tyr, a god concerned with justice and fairness. The thought behind it being that if you left something up to one of these monks you were leaving it with Tyr. An accountability tattoo essentially, an unbroken sign that you could hold the monk to a higher standard. If something was entrusted to the monk’s hands, it was being trusted to Tyr’s and you could expect as much.

There’s a gear belt that holds throwing darts but also a scale. The scale was my addition, I felt the design needed something there. It’s there to be used as a standard measuring set, something that could be used to resolve disagreements about what’s fair or how much something weighs. The downwards facing arrow would actually become a runic ‘t’ for Tyr which would be above the proceedings. Below it are weights of different value.

The sash under the belt is based on Japanese obi, a silk sash/cummerbund, underneath a European-monk style rope belt. I didn’t want to lean to heavily east or west. The flared-out hip coverings, baggy pants and boots are all based on stereotypical ninja gear. Something that would allow for comfortable, stealthy movement. The boots have exposed toes to allow for better grip to compensate for the fur-covered, sound-muffling soles.

Her cape is there for silhouette disruption, as well as basic cape duties. Her staff, which she uses in combat but also to set off traps, was assigned to her while at the monastery. Part of being the god of judgment involves judgment, so each end of the staff has a hand that represents either justice or mercy.

The whole costume was designed to be as symmetrical as possible, something I typically avoid. It’d would have been a uniform based on centuries of tradition and religious symbolism and I thought symmetry would likely be something that would emerge from a god of justice and fairness and balance. The one thing breaking the form is the badge Illyria got when she joined the Dross city guard. She’s loyal and faithful, but I saw the badge a symbol of something from outside, something that, if anything, might be a harbinger of challenges and activities she might not have been prepared for during her life away in the mountain monastery. It doesn’t mean she’ll fail, but it’s the one piece out of balance, and I think that role is going to be a major source of adventures and misadventures for her.

Illyria was very enjoyable to work on. It was nice having a chance to focus on a simpler character, and one that doesn’t wear armor. This process is always a challenge, and Illyria was no slouch!