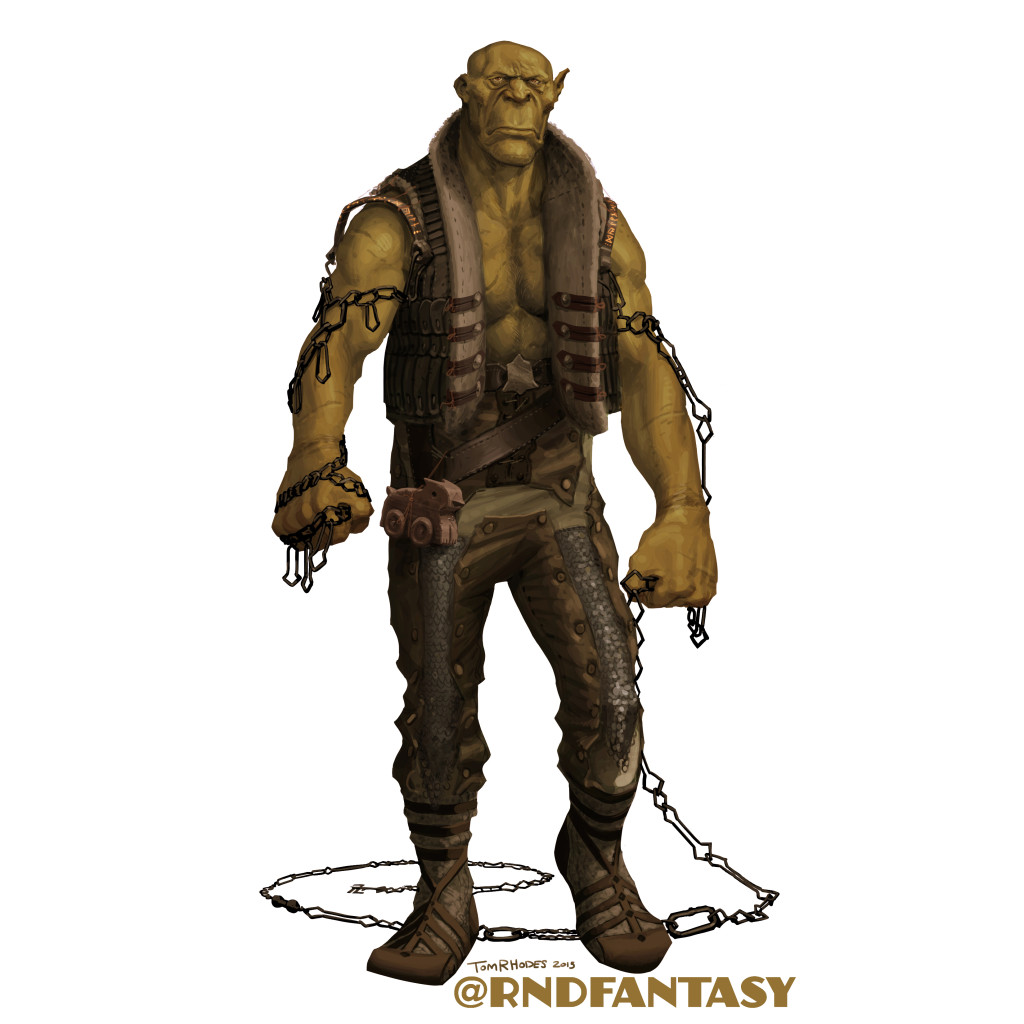 Davor Chainfist is a yellow orc sargeant in the military of Bellshine, where was born to skilled, though struggling craftsfolk. He was very close with his sister, but when she grew deathly ill the family had no choice but to sell Davor into slavery in order to pay for his sister’s medicine. He went without complaint because of his love for his sister.

Davor has always been large for an orc and, while in slavery, was quickly purchased by the owners of a pit fighting ring. He took to it quickly and learned to wield two chains to great effect. He was known for his preternatural swiftness which, unknown to Davor, had some foundation in arcane magic, manipulating the space around his body.

One day a skilled mage saw Davor fighting and purchased the remaining years on his contract. Over several years the mage helped Davor to harness his abilities consciously. He showed particular adeptness with warping and item enchantment, though he always preferred more concrete reality, rather relying on magic to augment his physical talents.

Immediately once his contract was up Davor set off to find his family but they weren’t back home. Without funds to travel to find them he joined the Bellshine military, hoping the travelling they would be doing would facilitate his own interests. In the military his skills and noble character made him invaluable and he attained several promotions through acts of valour and his service in various campaigns.

As for his appearance I was told he wears sleeveless, dark grey, leather armor and still wields his two chains. So with that, plus the fact that he’s counted in the ranks of a slightly rag-tag military force from a Dwarven and Orc-based society, I went with a no-nonsense military vest with a high collar. Something militaristic, plus high collars usually imply some level of status or authority. The surface of the vest is based on strip-leather scale armor, and the button hasps are there to imply some kind of uniform iconography.

The “shoulder boards” are actually the shackles that used to bind him as a slave, now enchanted and incorporated into his regalia. I wanted something to be on his shoulders and I felt this would be a great place for a call back.

His belt buckle is a stylized, angular Dwarven symbol for Bellshine (it’s simply a bell), and the lower scabbard belt, since not being used by swords in place of Davor’s chains, is used to hold another “weapon” of his: a small wooden owlbear pull-toy his sister gave him. He does use it in combat, which I go into in the long-play video, but I wanted it to look simply made (as if made by a competent child, in a medievalesque setting no less), was well cared for (pretty good shape for being used in combat by an orc in the military, plus it still has all its wheels) but has been chipped up quite a bit after all (it would be inevitable).

His pants are based on some 18th century chavalric officer pants which involved leather layers around the insides and outsides of the legs. I’d imagine Davor’s station would put him up on a horse and he would then be equipped for riding it. The chainmail thigh guards are there just for some extra protection from swords and other slashers. And his feet were based on Roman caligae, the sandals worn by ancient roman military, but with wool socks for comfort and longer walking. The Roman army was known for travelling far quickly, and since Davor’s motivation for joining the military was it’s travelling, I thought foot wear that helped build a reputation for long travel might be appropriate. They are as sophistically made as Roman ones, however.

Davor’s chains have been repaired, lengthened, shortened, lengthened many times over their existence, and in many lands and under many circumstances, even before he ever found them, so I wanted the chains to be made up of different styles of links to reflect that. At the end of the whip chain is also the key that was once used to lock him up as a tip. I thought that would be cool.

Davor was very rewarding to draw. I love drawing more creaturely characters more than humans and elves, though I enjoy drawing them too, but he was a nice change of pace and was happy to draw him.