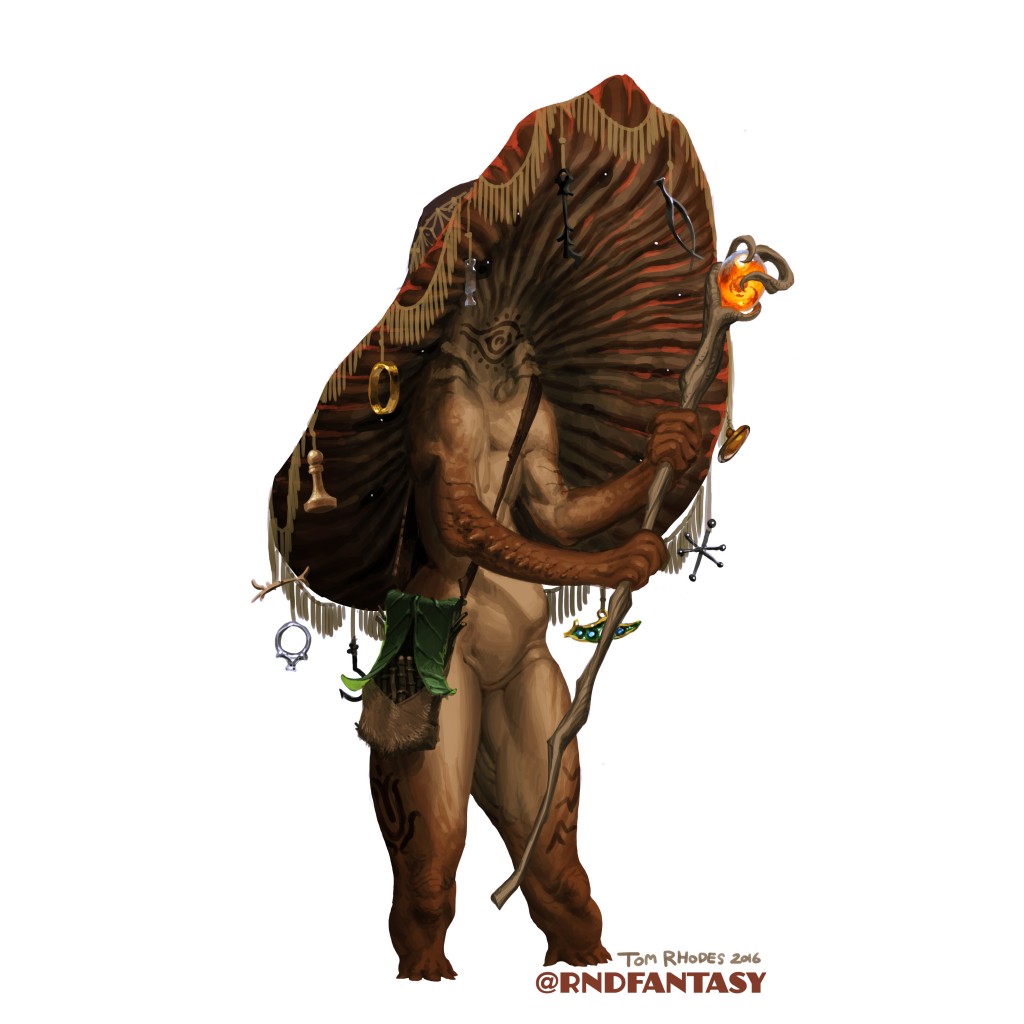 Arywen is a female Myconid that’s technically played as a bard, but with some clever modifications or ‘interpretations’ of the rules, which I won’t go into here.

Her main feature is her race and it brings up some serious challenges. After narrowing in on the kind of mushrooms she should be based on (there are many options) there’s still the issue of how she’s made. For reasons similar to insects (gravity, air pressure and fluid dynamics mostly) fungi can only practically grow to certain dimensions. It’s compounded by being an upright, active humanoid. I didn’t have time to really go in depth into thinking of how an invertebrate non-human made out of mush would be structured solidly, so I compromised with either straight, column-like, low-kneed legs or semi-rigid bendy arms. She has a lower center of gravity to compensate for her wide cap, which is supported by a wide, shoulder-width neck with four main tendon-like substructures. That head needs to be held on tight because once it gets moving it’s going to twist right off.

Not being part of a sexually reproducing species, she has no need for clothes and instead carries with her objects from her small community of druids. She has a simple satchel on her side made from animal hide and a leaf, with a wicker frame. Her cane has a seed frozen in amber at the top end. It’s hard to decipher but the seed inside is just beginning to sprout as an icon of eternal youth/life/regeneration, capturing a great tree at the moment of its birth.

Around her head are trinkets she’s found on her journeys. Michael described them being arranged like a carousel so I draped a doily over her cap to hang things from. Just little shiny bits of debris and toys and jewelry that she might have found interesting or beautiful.

On her legs are mystical druidic runes that keep her safe and enhance her magic. I put on representing an eye on her face to help make her come across as more relatable to humanoids on her adventures. Her actual eyes are in a 360 degree array around the underside of her cap.
It was early on in the research phase of Arywen that I realized how much fun Myconids could be. There’s so many great pieces of inspiration out there and you could easily populate a whole world is an awesome array of varying Myconids. I hope I get to revisit this race again