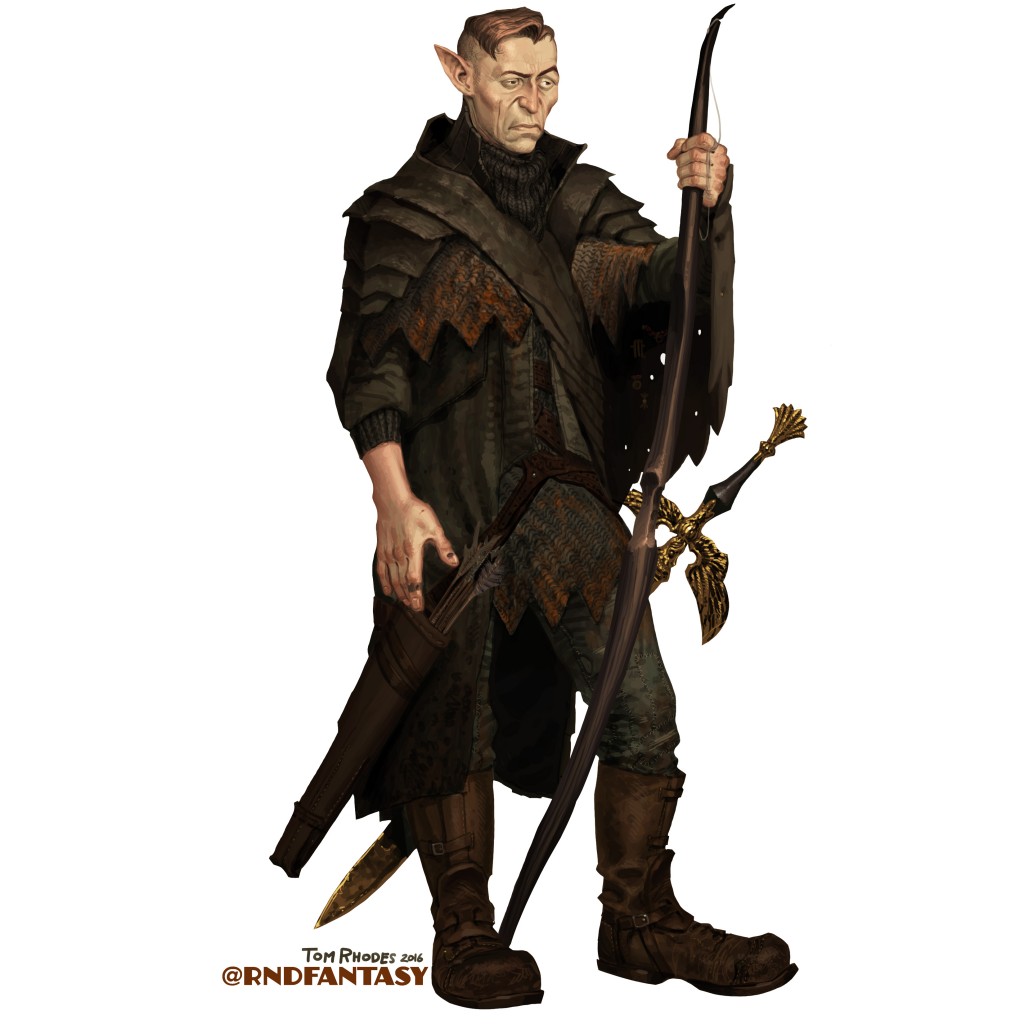 Aellas was a wood elf that was orphaned when a band of orcs murdered his family. They were crafstmen who thus worshipped Gond. He was found by a human military officer and then grew up amongst them. There he developed immense skill as a warrior, eventually favoring the bow, and grew immensely strong bonds with his fellow soldiers. After being asked to betray his troop of scouts he fled into the wilderness where he acts as a chaotic source of good for those in need.

He’s a wood elf raised by humans, so there isn’t much justification for any stereotypical wood elf-styled fashion. Though when someone chooses their player’s race it’s safe to assume they imagine that character embodying aspects of that character beyond, well, their body. There are certain expectations. Thankfully, being military, being an archer, and being a scout and someone who’s trying to hide he luckily landed in the appropriate green and brown section of the color wheel. A great way to bring the two back together without betraying the character.

Part of the description included long-obeyed grooming and maintenance rituals still being in effect. He polishes his boots and shaves every day. With this in mind he’s clean-shaven (though while cleaner than I’d prefer in a medieval setting, I could find no reference to wood elves having beards) with a short-cropped military style hair cut, and his officer  boots, while old and well-worn, are kept fairly well. They’ve been in his service for possible many, many decades, so even though they might be falling apart they can at least be smooth and cared for.

He has asymmetrical leather armor with a sash pattern down his chest. I imagine it would be comfortable armor for an archer but would also look proper when covered in medals and a fruit salad. The slab of leather on his one side is meant to serve as an impact-dampening curtain to reduce the damage from enemy arrows. It would also help him in his role as scout as it would serve in silhouette disruption, bettering his camouflage.

The cravat is meant to be more than just practical. A high collar helps someone look more mature and proper, and the cable-knit look rarely works for villains.

While wood elves can live past 700 years old, it can be difficult to find an appropriate way to display maturity or age on their faces. At 250 years old, Aellas has seen some time but he’s still got a long way to go. There needs to be some age to the face, at least for the viewer’s sake, So rather than age lines I gave him deep-set check wrinkles and heavier eye-lids as if he’s weary of the world. Crows feet, bags under the eyes and obvious nasolabial folds, while very common in real life, would add too much age in the wrong way. Any detail you add to an illustration is enhanced by its very existence in the image. Any detail that’s included is there for a reason and is seen as a declaration of something. So be careful with what details you add. As a way to help add age and time to him without mucking up his face I added rust to his chainmail. I’d hope that it speaks to him being both outdoors and outdoors for a long, long time.

His fingers are in a little bit of rough shape. Cold hands turning pink and a bandage on one finger and a bruised thumb. The damage was there as a note of his family history as a craftsman. I’ve known a lot of engineers and carpenters who would routinely have been dark blood blisters under their fingernails. He might be from a family of elven craftsmen but he left them too young to be too proficient. I also imagined him making his own bows out in the woods. Something he’d be fairly good at, and he’d be willing to lose his bow and make another one, either from over-use or in combat.

His arrows all have different flights. This was done because I imagine him making arrows of whatever he can find, or them being specialized based on the flights. I don’t know if archers ever think this way or if it’s valid at all but I thought it could be interesting. At the very least it gave me the idea for varying arrows. They could also be plucked from the quivers of fallen enemies.
His sword was discovered and may still have more adventures to get him into and out of.